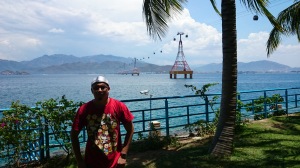 June 2014 – My mother & youngest brother came to visit me & my kids here in Vietnam. Having said that, we all took the opportunity to travel to the central coast of Vietnam, to the city of Nha Trang. It took about an hour flight from HCMC. Flying by night, the most eye-catching view from above the Nha Trang skyline is the lights from the cable car structures connecting the mainland to Hon Tre island. The cable car is the longest over water cable car in the world spanning 3 km long.
Spending some 3 days here, we went around the coastal city to indulge in its history, nature and recreational development. 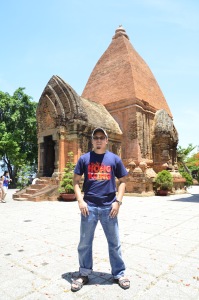 We started our first morning by visiting the Po Nagar tower built by the Champa. Here we learned some history of the port city which was originally a medieval Cham city named Kauthara. The temple itself dated back to the 10th century, long before the arrival of Islam to the Chams. The structures itself demonstrated the fine artistry & the historic marvel of the Chams. As the Chams used to rule the coasts of Indo-China, what is left of them now are a stateless people and only remains of their once historically dominant kingdom. 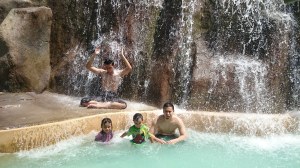 We next went for the famous hot mud bath in Thap Ba hot springs. The place is a suitable place to dip for all ages as it seems to have become a spa-cum-mini water park. For the mud bath, the mud is said to be coming from from rocks & volcanic ash pumped from underground before mixing with hot mineral water.We had a satisfying 30 minute mud bath. After enjoying the mud bath, we eventually took a swim at the hot artificial water falls and had a good time.

In the afternoon, we set out for a boat ride for island hoping and visited a floating fishing village. We observed the many type of fish & squid being bred and sold here and watched some tourists drop from their boat to buy some seafood. 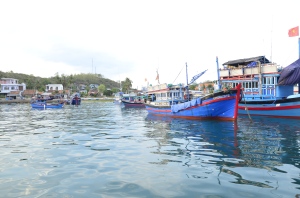 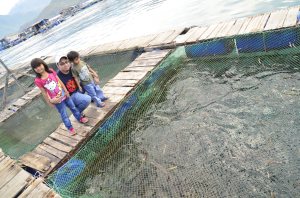 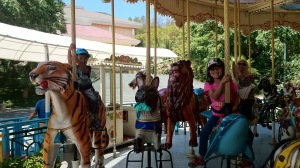 The next day, we spent the whole day at Hon Tre island at Vinpearl amusement park. Amusement parks in Vietnam often offer more than just fun fair rides & games, but also exhibitions. Similarly, at Vinpearl, there was a large aquaria exhibition, dolphin show, musical fountain show & some cultural performance on the streets. The aquarium exhibition, as typical as it sounds, was not a dissapointment. The marine animals on display were as close as any underwater exhibition such as in Singapore, Kuala Lumput or Sydney. 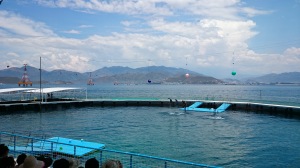 The dolphin show was unique as it was located by the seaside. The musical fountain was one of a kind; using lasers, lights and coordinated fountains dancing to traditional & modern music. 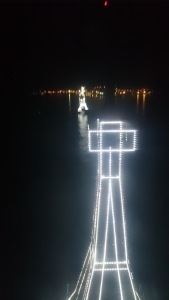 There is also a large water park for all ages to enjoy. The park included a large pool with artificial waves, tall spinning water slides for adults to test their hearts.

Experiencing Vinpearl will take a whole day, until night. The last wonder is to ride the cable car at night through the glorious night lights of the suspension towers.

After 3 days in Nha Trang, Nha Trang is admittedly a great destination for a family getaway while learning a lot of history, enjoying geology, a beach environment, marine life, and a some family entertainment at Vinpearl.