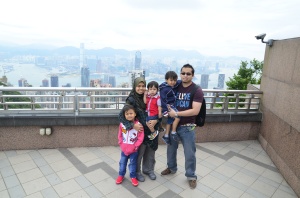 May 2014 – Visiting the business capital of Asia, the only business we had there was to trade for new experiences; and Hong Kong is a perfect place that offers more than stock exchange & financial services.

We stayed for 2 nights at Discovery Bay, before moving to Kowloon for another 2 nights to stay in the city center. Knowing we would be moving around (without a driver), & optimizing from our travel experiences, we traveled as light as possible.

We stayed at Discovery Bay on Lantau Island, the same island as the airport, for ease to travel to Disneyland, which is just some 10 minutes drive from our hotel. The only disadvantage was that Discovery Bay was a private area, hence no public transport could enter. So we only had to rely on the internal bus system to get us around. Although, the busses’ timing are accurate, it took us 2 busses to get from the front gate of Discovery Bay to our hotel. Worse, it was raining the night we arrived. On the good side, the hotel provided free busses to Disneyland & City Center, which helped us a lot in getting to our destinations for the first 2 days.

The following 2 days, we stayed at Regal Kowloon which was at the heart of the city, and a walking distance to almost everything in Tsim Sha Tsui, the main tourism area. Although it might take a few walking minutes to the promenade, we enjoyed the walk throughout and always had things to look at along the way. By the way, the famous Hong Kong MRT would always be useful for commuters, but we decided to get around by taxi everytime going somewhere far.

We started our adventure on Hong Kong with the excitement of Disneyland. The joy, atmosphere & energy were amazing, as expected from every Disneyland around the world. However, the lines for every ride were pretty long and would take some 10-20 minutes queueing each time. 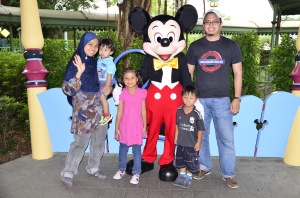 This, being my 2nd Disneyland trip, first was in 1989 in LA, reminded me so much of my childhood & Disneyland experience. The “It’s a small world afterall” boat ride seems to have become a Disneyland trademark that gets us to appreciate the various cultures of the world; it was so reminiscing.

We rode a bunch of rides, watched the awesome Lion King show, watched Mickey Mouse’s magical orchestra, and so on. There were so many scheduled shows that it was kind of impossible to keep up to each show and to reach on time. So we planned our stops accordingly. There is a Muslim prayer room near the front, but being accustomed to travelling, we simply performed our prayers at some convenient spot in the center of the park. Taking photos with Disney character was a major highlight of the visit. My children loved the photo session so much. The evening ended with the all-famous Disneyland musical firework show, which was astounding. There was also a halal food restaurant in the park, which was where we had our lunch & dinner.

Having 1 day for a city tour, we kept our schedule tight and did not wonder too far off from downtown Hong Kong.

Victoria’s peak on the Hong Kong main island is a spot never to be missed if you are touring Hong Kong. The peak is where you could see the whole beautiful city of Hong Kong & be amazed by the development of the small island.

Most of the main tourism sites are in Kowloon in the Tsim Sha Tsui area. We simply walked there from our hotel & everything else is within walking distance. Avenue of stars, Cultural Center, Clock Tower & Kowloon Pier are all nearby. By 8pm, every night there would be a light symphony being played from buildings around the bay, making the city look so lively.

While Tsim Sha Tsui area serves as a haven for shopping, especially for branded goods, we mostly went shopping at the Nui Yan Kai or Ladies’ market. Ladies’ market seems to be the place where all tourists go shopping for chinese goods at bargained prices. This is the place where we picked up Hong Kong souvenirs, t-shirts, shoes and many things to bring back home.

There is another market on Hong Kong island called the Stanley market. However, we did not go visit the place as it’s location is quite far and that we have already shopped enough.

We had the opportunity to visit 2 mosques in Hong Kong. The first was Masjid Ammar And Osman Ramju Sadick Islamic Centre located in the Wan Chai district on Hong Kong island. The mosque also holds the famous Islamic canteen serving delicious halal chinese dim sum. A must visit for Muslim tourists.

The next mosque we visited was Kowloon Mosque & Islamic Centre on Nathan Road in Tsim Sha Tsui. The place is just walking distance from all the attractions at the bay. After praying at this mosque, we went to have a live peak at their madrasah & the religious lessons being taught in Chinese.

The mosque is always the best place to meet the local Muslim community, observe their lives, & contribute wherever possible.

Besides mosques, there are plenty of halal restaurants in Hong Kong. There are a number of middle eastern restaurants nearby the Kowloon mosque. There would be staffs distributing flyers promoting their restaurants and will even escort you there. We also crossed a few halal restayrants while walking through the buildings along Moody road. We also found a Turkish restaurant at the Ladies’ market and stopped there for dinner.

We were in Hong Kong for 4 nights & 3 full days. I think it was basic enough to cover the main attractions of Hong Kong. But of course, there are a lot more to discover; hopefully there would be a next time for us.