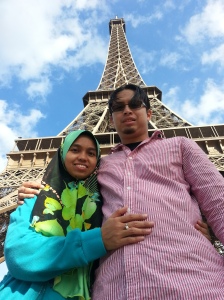 June 2013 – Alhamdulillah, finally fulfilled my wife’s dream to step in Paris. I, myself, have been here for a holiday back in 1995, so it’s definitely an excitement for me to be back too.

We spent 2 full days exploring Paris city. Having a good integrated metro system, we toured around the city by foot & by train. The toughest part was when we had to carry the double stroller up & down the stairs to the Metro. We stayed within walking distance to Sacre-Coeur. We shopped for souvenirs at nearby Rue de Steinkerque, and could catch a Metro anywhere along the nearby Boulevard de Rochechouart. There are also plenty of halal restaurants around the area convenient for us to catch a meal.

We arrived in Paris early in the morning. Upon resting & settling in our apartment for a few hours, we then kicked off our journey to explore the city of Paris.

Our first destination was the famous Sacred Heart Basilica (Sacre-Coeur) up on the hill of Montmartre, the highest peak in Paris. From our apartment, we simply walked and then took the funicular car up the hill instead of climbing the stairs provided to the basilica. The view of Paris from atop the hill was astounding. I could not help but to keep clicking my DSLR shutter to capture the view, & also the lively activities around the basilica. There were street performers playing music, people selling flowers, tourists posing by the church also enjoying the hill view of Paris. The place was exciting, a good start for our Paris tour.

We then continued our journey to the Notre Dame Cathedral. Before that, we had lunch at a halal restaurant along Boulevard de Rochechouart. We were even fortunate that some friendly customer treated us to lunch after seeing our adorable & adventurous children. Our Notre Dame journey brought us to Île de la Cité. We explored the island by foot, going to the gates of Palais de Justice and Conciergerie which is a former prison. We even walked cross the Pont au Change to Place du Châtelet, before returning back and walked along La Seine to Notre Dame cathedral. As we finally arrived at Notre Dame, we learned that it was the 850th year of historic church, and flocks of people were all around the buidling, taking photos or lining up to enter the historic church. Excited but tired from the walk, we spent our time leisurely in front of the church, taking photos, feeding pigeons & enjoying the atmosphere. We then had a stroll & rest under the shades by the southern facade of the church before crossing the Seine to the Metro for our next destination.

Next, we headed to the most famous landmark of all France: The Eiffel Tower. Getting off Champ de Mars station, it was so exciting to see the majestic structure within walking distance. As we reached & stood beneath the tower, we gazed up the majestic structure from below and let ourselves be amazed by the beauty of marrying vision, art, technology & construction. We took plenty of photos from below the tower before scaling up via lift to the 2nd observation floor. From the 2nd floor, we circled the tower to get a view of Paris 360 degrees. We took many photos as proof of our conquering of the tower. The city of Paris seems so vast as it expands all over the horizon even from an Eiffel tower view. Our tour for the day ended at the Eiffel tower as we then headed back to our apartment. We also happened to stop by Rue de Steinkerqueto shop for souvenirs.

We then took the Metro to Musee du Louvre. Due to limited time, we only toured the outside of the building, and enjoyed mostly at the famous glass Pyramide du Louvre.

We then took the Metro and travelled to Grande Mosquée de Paris. We were excited to visit the grand mosque, perform our prayers, saw a knowledge sitting of youths, and witnessed a humble wedding ceremony. We walked around the mosque to indulge in the atmosphere of the Muslim sanctuary in the city of lights. We also had a meal at a restaurant just nearby the mosque.

We next headed back to Champ-Elysees, to return to Arc de Triomphe. We went up the building just in time for sunset. The early summer wind felt so cold from on top of the Arc. But the splendid view of the sunset and the city of Paris by nightfall made our patience worth & satisfying. We also got to observe the Eiffel tower lights changing color through the hour. Sunset was close to 10pm, hence that marked our final activity in the city of love.

The following morning we were off to Charles De Gaulle for our next destination in this Euro trip. Our visit to Paris was indeed colourful & memorable, and a great milestone in our family journeys.